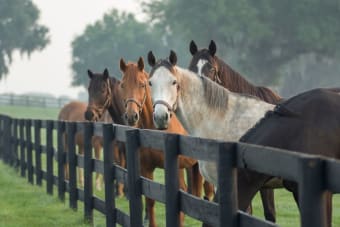 There are many causes of colic in horses and symptoms range from very mild to severe. Today, our Mountainaire Animal Clinic vets will explain equine colic and its symptoms, causes, treatment, and prevention options.

A simple definition of equine colic is pain in the abdominal cavity. In general, it involves the horse's gastrointestinal tract, but problems in the equine kidneys or reproductive tract can also cause colic-like signs.

A horse with colic will show varying symptoms depending on the cause of the colic, how long it has been present and the stoicism of the horse.

Mild colic symptoms include dullness, curling up of the top lip, adopting a 'straining to urinate' stance, and lying quietly.

Severe colic pain can cause a horse to roll and throw itself about in an uncontrolled and dangerous manner.

Colic can be due to something as simple as a gut 'spasm' resulting from a change in diet or routine i.e., a digestive upset, or as serious as twisting of a part of the intestine with consequent strangulation of its blood supply.

The more common causes include impaction (where the intestine becomes clogged with semi-digested food material), displacement of a segment of the bowel from its normal position, torsion or twisting, strangulation through hernias or holes, strangulation by fatty tumors wrapping around them and other causes of obstruction.

Different types of colic require different treatments, so an accurate diagnosis is the first step. Simple large colon impactions usually respond to treatment by lubrication with oil, salt, and water given by the stomach tube. Many cases respond quickly to analgesics (painkillers).

Some cases require urgent aggressive treatment - either medical or surgical if the horse's life is to be saved.

There is some colic that can only be treated by operating to correct the underlying problem.

Regular deworming to prevent damage to the intestine and its blood supply helps enormously. Keeping to a routine and avoiding sudden changes in management and feed type also helps. Horses and particularly their intestines are creatures of habit.

If you think your horse is suffering from equine colic, please contact our Mountainaire Animal Clinic vets right away for an appointment.

Mountainaire Animal Clinic is accepting new patients! Our experienced vets are passionate about the health of Rock Springs companion animals. Get in touch today to book your pet's first appointment.